I THOUGHT OUR COMMUNITY WAS ULTRA ORTHODOX? 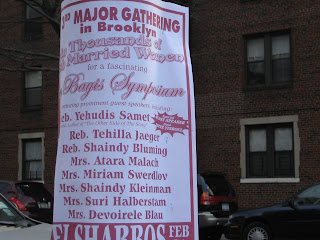 I thought that our community was almost as Orthodox as it gets, then my bubble was burst when I saw this poster hung up everywhere.

A few weeks (months) ago, there was a major gathering of women in Israel. What they spoke about there was issues dealing with women, and the speaker they had was a man (rabbi). Why? well, the Rabbanim (men) felt that a women (rebbetzin) could not make a public speech, because it was immodest, even though it was in front of only women 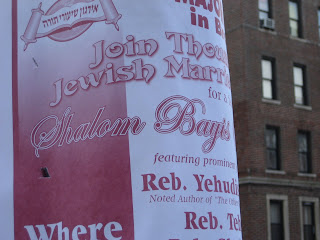 (you could argue that, but lets not and say we did). Now, when I saw this poster I thought, of course a man is going to deliver the speech (the rabbanim in Israel said so), right? . Well, I was wrong, in fact there is not one speaker who was a male; plus, no one said anything about that, and its the third week of this. Which leads me to think, "Are we that Orthodox?". Ill leave you to decide. 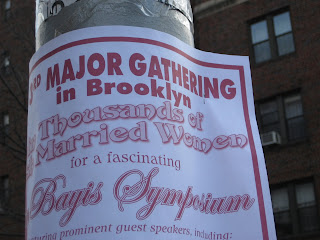 Although the Wolf is a professional photographer, I believe I did a great job, you could say I really captured the moment ;)

Thought of by Mikeinmidwood at 7:57 PM

I know, its a shanda.

Yes it is then, but I cant believe you would go to such a treife place.

And now you know our community is actually full of Feminist Floozies - isn't this the sort of thing we've been Warned against all along?

Guess we have not completely lost our collective minds...yet.

Just in the interest of full disclosure: I am not, nor have I ever been, a professional photographer. I'm just a guy who enjoys taking pictures. I've never been paid anything for any of them. :)

I think the proper thing to do would be to go and protest.

I say we go and burn some garbage cans, all in the name of daas torah. Don't worry, there is still time left for this thing to be banned, let's contact our local "askan" and demand that they take a stand.

How well we ever go on?!

Youre still better than me.

But we have strayed so far from the path, how will we ever return?