The Prayer booth is a new concept for the non Jewish world. It started as just an idea by one guy and now has been installed in New York City. At first I thought it was a joke. Then I saw the pictures and was shocked to see it even had a pull out kneeler. For us Jews this is a pointless invention. In fact we really started this idea going way back to the creation of phone booths and davening mincha in them. The only way this could ever beat the modern day phone booth is for it to have a pull out shtender or maybe a spare hat and jacket.

You probably wont even be able to use it because the Muslims will be in it 5 times a day. If you were Christian could you use it as a way to get out of church? Halachicly will you be able to use it? Do you need to put in 50 cents? If you are taking a long Shmona Esray will it tell you to deposit 25 cents for another 2 minutes? One last thing. Imagine your walking and you notice a Muslim walk into one and start kneeling down. Would you not think he is weird to be just kneeling in public? I don't think this concept will catch on and its going to become a spot for the homless to sleep (with the kneeler as a bed). Here is some pictures. 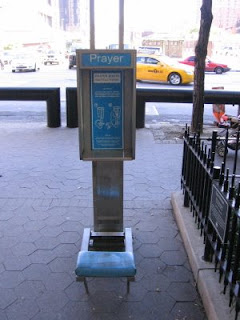 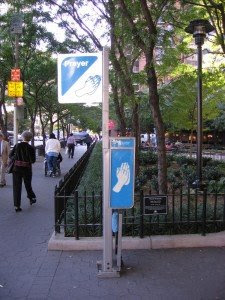 Thought of by Mikeinmidwood at 11:15 AM

there's a joke about the pope, the chief rabbi and their respective hotlines to god . . .

I guess this booth is only good for Xtians. I mean where are the Muslims going to lay their prayer rugs and as far as the Buddhists are concerned I am sure they can't balance themselves on that little pad where one is supposed to put their knees. Have to ask the guy who invented this, "why pray in the middle of street when you can pray in the comfort of your home?"

The pictures are for real and I heard that joke, liked it.

"why pray in the middle of street when you can pray in the comfort of your home?"
Why do Jews daven in phone booths? The answer will never be resolved.

I have never seen this before. Before I saw the picture, from your description I imagined a little booth with a curtain, like those photo booths. This is so out in the open. I would feel weird kneeling, folding my hands, and bowing my head in the middle of a busy sidewalk on that thing. I notice the booths were empty!

I like to play with peoples imagination first. "I notice the booths were empty!" Obviously, its not a great idea.