This past Yom Tov was filled with much randomness. First I got a look at my Esrog which doesn't have a Pitom (one of the most important parts to an Esrog). Its kosher since it was pulled off the tree like that. Still don't know why I have to return my Citrus fruit back to Israel cant I just bury it? My grandfather had a very weird looking Esrog. It was sort of anorexic. 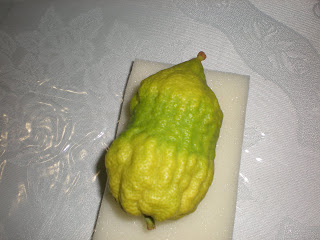 It was a freaky looking Esrog. You may not be able to see but it was like it had a grip handle right around it. My Lulav was the perfect Lulav. I never enjoyed shaking a lulav like this one. Its perfect. It flaps its branches into a fan like position and then pops back into a spear like lulav. You have a few types of lulavs. One just wont bend in any direction (kind of like the one I had last year). Another is just too spread out and you are constantly trying to adjust those bands they put on it to keep it together. Then there is the awesome lulav which is just right (I feel like Goldilocks now) not too floppy and not too straight.

Hoshanos was a little funny on the second day. I went to a shul with a lot of older folks in it. The chazzan started hoshanos and he was moving around the shul. I started Hoshanos and didn't move at all. Somewhere in the middle of the line it just wasn't moving. The chazzan passed me as he went around, which should not have happened since I started not so far away from him. In the end they gave us time to go around if you didn't yet.

My stay in the sukkah so far has been pretty good. No rain or bugs, it has been nice weather. Hey does anyone sleep in the sukkah? I don't, even though its supposed to be a temporary dwelling and all. Well I am running short on subjects here so Chag Sameach y'all.

Thought of by Mikeinmidwood at 5:24 PM

I had an experience where three guys were fighting over who poked who with their lulav. It got so wild the rabbi had to get involved.

that anorexic esrog is pretty weird.

i that type of lulav that didnt go in any direction it was so annoying.

those are called Gartel Esrog's and their supposed to be better.

2 of my brothers slept in the succah this year for the first time.

I thought it was funny. thanks.